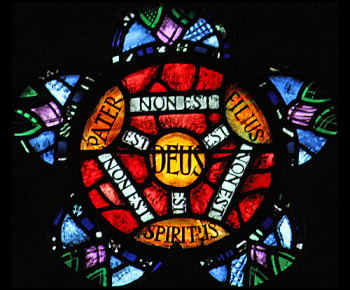 Christianity teaches that God is not only our creator, judge, and savior, He also is our Father. We have a God that has a personal relationship with us. We pray to God as our Father. We are children of God. Not as the true Son, Christ; but, we are adopted by His choice and mercy.

God is our Father

“For Thou art our Father, though Abraham does not know us, And Israel does not recognize us. Thou, O LORD, art our Father, Our Redeemer from of old is Thy name.”
(Isa 63:16 NAS See also Jer 3:19)
“A father of the fatherless and a judge for the widows, Is God in His holy habitation.”
(Psa 68:5 NAS)

The apostle Paul calls God our Father many times throughout the New Testament.

In the gospel of Matthew, Jesus says to only refer to God as your Father.

This does not mean our legitimate earthly father is not our father; but, the only redeeming God is to be referred to as our Father. Our earthly father cannot save us.

We are to pray to God our Father

When we pray, Christ said to pray to “Our Father” in heaven.

The Father cares for us and provides for our needs.

“Look at the birds of the air, that they do not sow, neither do they reap, nor gather into barns, and yet your heavenly Father feeds them. Are you not worth much more than they? ”
(Mat 6:26 NAS)

This does not mean we are the same as Christ in sonship. Only that, Christ is the true begotten Son of God.

Christ is the only begotten Son of the Father

Christ is the only begotten Son of God. God has no other children that come from Him.

Christ alone comes from the Father and knows the Father. It is the will of God the Father to save the world and for His people to come to Him.

It is the will of the Father to save us

The will of God the Father is to save that which was lost in the world.

The Father’s will is to send His Son to die for those who believe in Him.

“Grace to you and peace from God our Father, and the Lord Jesus Christ, who gave Himself for our sins, that He might deliver us out of this present evil age, according to the will of our God and Father, to whom be the glory forevermore. Amen.”
(Gal 1:3-5 NAS)

“For this is the will of My Father, that everyone who beholds the Son and believes in Him, may have eternal life; and I Myself will raise him up on the last day.”
(Joh 6:40 NAS See also Joh 8:28)

Only the Son of God can reveal the Father to anyone. This means only in Christ can we come to God the Father.

Only Christ brings us to the Father

We can only know the Father through the revelation of Christ the Son.

Christ will make us holy before the Father.

“So that He may establish your hearts unblamable in holiness before our God and Father at the coming of our Lord Jesus with all His saints.”
(1Th 3:13 NAS)

Because of what Christ did for us, we have fellowship with the Father.

“For both He who sanctifies and those who are sanctified are all from one Father; for which reason He is not ashamed to call them brethren ”
(Heb 2:11 NAS)
“What we have seen and heard we proclaim to you also, that you also may have fellowship with us; and indeed our fellowship is with the Father, and with His Son Jesus Christ.”
(1Jo 1:3 NAS)

We have fellowship with the Father and are called “Sons” or “Children” of God.

We are Sons and Children of the Father

Our fellowship with God is that of a child. We are the children of God the Father.

“See how great a love the Father has bestowed upon us, that we should be called children of God; and such we are. For this reason the world does not know us, because it did not know Him. Beloved, now we are children of God, and it has not appeared as yet what we shall be. We know that, when He appears, we shall be like Him, because we shall see Him just as He is.”
(1Jo 3:1-2 NAS)
“But as many as received Him, to them He gave the right to become children of God, even to those who believe in His name, who were born not of blood, nor of the will of the flesh, nor of the will of man, but of God.”
(Joh 1:12-13 NAS)

Not all people in general are God’s children, only those who believe in God are His children. There are “false brethren.”

“But actually, I wrote to you not to associate with any so-called brother if he should be an immoral person, or covetous, or an idolater, or a reviler, or a drunkard, or a swindler– not even to eat with such a one.”
(1Co 5:13 NAS)
“But it was because of the false brethren who had sneaked in to spy out our liberty which we have in Christ Jesus, in order to bring us into bondage. ”
(Gal 2:4 NAS See also 2Co 11:26)

The “false brethren” to not have faith in Christ.

Faith in Christ makes us children of the Father

All who have faith in Christ are Sons of God.

“For you are all sons of God through faith in Christ Jesus.”
(Gal 3:26 NAS)
“And Jesus said to them, “The sons of this age marry and are given in marriage, but those who are considered worthy to attain to that age and the resurrection from the dead, neither marry, nor are given in marriage; for neither can they die anymore, for they are like angels, and are sons of God, being sons of the resurrection.”
(Luk 20:34-36 NAS)

The children of God are sons through the resurrection of Christ and choice of the Father. We are children by adoption.

We are adopted children

We wait eagerly for our adoption as sons.

“And not only this, but also we ourselves, having the first fruits of the Spirit, even we ourselves groan within ourselves, waiting eagerly for our adoption as sons, the redemption of our body.”
(Rom 8:23 NAS)

We are adopted as children of promise. Not only Israel; but, the world, Jews and Gentiles from all the nations.

All believers, regardless of nationality, are the Fathers children by adoption.

“Now this he did not say on his own initiative; but being high priest that year, he prophesied that Jesus was going to die for the nation, and not for the nation only, but that He might also gather together into one the children of God who are scattered abroad.”
(Joh 11:51-52 NAS)
“‘And it shall be that in the place where it was said to them, ‘you are not My people,’ There they shall be called sons of the living God.’ And Isaiah cries out concerning Israel, ‘Though the number of the sons of Israel be as the sand of the sea, it is the remnant that will be saved;'”
(Rom 9:26-27 NAS)

Being adopted was the desire and choice of the Father, for, it was His kind intention to save us.

Our adoption is carried out by the Father, Son, and Holy Spirit

The Father chose to be adopt us before the foundation of the world.

“Blessed be the God and Father of our Lord Jesus Christ, who has blessed us with every spiritual blessing in the heavenly places in Christ, just as He chose us in Him before the foundation of the world, that we should be holy and blameless before Him. In love He predestined us to adoption as sons through Jesus Christ to Himself, according to the kind intention of His will, to the praise of the glory of His grace, which He freely bestowed on us in the Beloved.”
(Eph 1:3-6 NAS)

Christ’s coming and living in our place redeems us and adopts us to the Father.

“So also we, while we were children, were held in bondage under the elemental things of the world. But when the fulness of the time came, God sent forth His Son, born of a woman, born under the Law, in order that He might redeem those who were under the Law, that we might receive the adoption as sons. And because you are sons, God has sent forth the Spirit of His Son into our hearts, crying, ‘Abba! Father!’ Therefore you are no longer a slave, but a son; and if a son, then an heir through God.”
(Gal 4:3-7 NAS)

The Holy Spirit leads us to the adoption of the Father.

“For all who are being led by the Spirit of God, these are sons of God. For you have not received a spirit of slavery leading to fear again, but you have received a spirit of adoption as sons by which we cry out, ‘Abba! Father!’ The Spirit Himself bears witness with our spirit that we are children of God, and if children, heirs also, heirs of God and fellow heirs with Christ, if indeed we suffer with Him in order that we may also be glorified with Him.”
(Rom 8:14-17 NAS)

Because we are adopted by God, we are brothers and sisters in fellowship with God. We are not just brothers; but, sisters as well.

We are brothers and sisters of Christ

Christ has brothers and sisters. God did not just adopt men. He adopted women and children as well.

“For whoever does the will of My Father who is in heaven, he is My brother and sister and mother.”
(Mat 12:50 NAS)

The brothers and sisters of Christ do God’s will.

“No one who is born of God practices sin, because His seed abides in him; and he cannot sin, because he is born of God. By this the children of God and the children of the devil are obvious: anyone who does not practice righteousness is not of God, nor the one who does not love his brother. For this is the message which you have heard from the beginning, that we should love one another;”
(1Jo 3:9-11 NAS)

When giving instruction on marriage, Paul refers to the believing women and men as brother and sister.

“Yet if the unbelieving one leaves, let him leave; the brother or the sister is not under bondage in such cases, but God has called us to peace.”
(1Co 7:15 NAS)

Paul also explains that we are to appeal to each other as family members, as mothers, fathers, sisters, and brothers.

“Do not sharply rebuke an older man, but rather appeal to him as a father, to the younger men as brothers, the older women as mothers, and the younger women as sisters, in all purity.”
(1Ti 5:1-2 NAS)

God the Father has adopted for Himself as an enormous family to be His children.