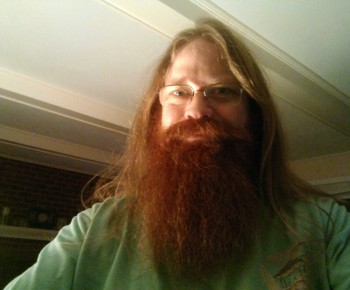 The Apostles-Creed.Org is about providing information about the Christian faith and is based off of the Reformed Orthodox Christian Faith; however, you will find resources from all types of Christianity. Whether you are Baptist, Roman Catholic, Methodist, Presbyterian, Seventh Day Adventist, or whatever you want to call yourself, read the confessions from the church fathers. The creeds and confessions are a rich heritage Christians can draw from to learn about God and Christ.

Who is the author?

The author of the Apostles-Creed.Org is me, James Richardson. I was born in a Roman Catholic home. I went to church at a very young age and was baptized in the Roman Catholic church. It wasn’t till my parents were divorced when I was removed from the church completely. For most of my childhood I never went to church. Through a series of unfortunate events and turmoil, I went back to live with my Mother who gradually brought me back into the church.

During that time, there were many christians in Southern California. Calvary Chapel, “Harvest Crusades,”  CRI (Christian Research Institute), and BIOLA University were all very vocal at that time. At the time, I was a dispensationalist, and believed all the “Rapture,” PreMillenial reign of Christ,” and “Modern” theology. Many Christians taught that if you didn’t believe in the rapture and premillenialism, you were considered a lesser Christian, and sometimes referred to as no Christian at all. I still have my “Dispensational Truth” book written by Clarence Larkin for nostalgia reasons. The Christians I was around all hated Roman Catholics and considered Methodists and Presbyterians apostates.

While living with my Mother, I began to attend the Calvary Chapel in West Covina, California, led by Pastor Raul Ries. The church was extremely “clickish” and was difficult to be a part of the church there. During that time, Raul Ries had a series of sermons promoting “Arminianism.” He consistently would bash anyone who believed in “Eternal Security” and pounded the view that you can lose your salvation. It did not seem right to me that a pastor should be so divisive, narrow minded, and an out right “know it all.” They pushed people out with an attitude of, agree with them on all their teachings or leave. Because of this, I left Calvary Chapel and began attending Grace Community Church in Panorama city California.

Leaving Calvary Chapel to go to Grace community church was like going from playing with radio controlled cars to racing NASCAR. Grace Community church was the greatest most important part of my life as a Christian. Their bookstore alone kept me learning every different view found in Christianity. The most helpful, was the back room in their bookstore. At that time, The Masters Seminary was in little trailers in the church parking lot. So, all of their seminary books were in their bookstore available to anyone for purchase. I learned from reading books written by Robert L Thomas, Dick Mahue, and John MacArthur Jr.. I felt like I went through a poor mans seminary. It was good times for me.

They even had books by people from puritans, like Thomas Watson, Thomas Shepard, John Bunyan, and a host of others. There I was exposed to The Pilgrims progress, which, was a very eye opening book about a Christians life. I learned about “Progressive Dispensationalism” and other views about eschatology that were deemed “Anti-Christian” by the previous churches I went to. There were books by all kinds of people. Baptists, Reformed, Presbyterian, puritan, and more. Grace Community Church really does not hide any view from Christians and has a more open minded approach to Christianity that I was not accustomed to. Unfortunately, I had to move far away where I could not attend there any more.

When I moved I ended up going to different Baptist Churches. I initially went to a “Fundamentalist” Baptist church that was based from Hyles Anderson College. While they had good points that I could understand and accept, they were very divisive and had overly zealous and radical teachings. The pastor Turner, who later left the church, was quite the hysterical one. He would always be on some sort of homosexual witch hunt. Their view was a type of “Arminianism” that believes in “Once saved always saved.” I would equate them to a rendition of J. Vernon McGee on a hysterical witch hunt.

I confronted the pastor about some inappropriate language he was using in the church service which escalated into a verbal debate. He was not the type to tolerate anyone disagreeing with him so he threw me out of “his” church. I was thankful for that. I could not take the verbal abuse and divisiveness anymore. I ended up going to an American Baptist church, which did not go so well, and ended up in limbo on finding a church.

After studying quite a bit during this time, even though I was more like a Reformed Baptist, I started attending the Orthodox Presbyterian Church. Every book I would buy online ended up being a Presbyterian and Reformed publishing book. I bought books buy the stacks from gospel missions bookstore, a Reformed Baptist ministry. The straw that broke the camels back on my Dispensational beliefs was reading “The gospel of the Kingdom” by Philip Mauro. Philip Mauro influenced me heavily during this time. Although I was going to the OPC, I identified mostly with the Reformed Baptist church. I still carry the 1689 London Baptist Confession of Faith in my Bible today.

I ended up abandoning the Baptist view of Baptism through my own study, and ended up a full blown Presbyterian. The theologians that most heavily influenced me were, Charles Hodge, B.B. Warfield, John Calvin, Philip Mauro, Louis Berkhof, William Ames, and Thomas Watson. The writings from these Christians were so impactful and defendable as a Christian, they molded me to what I believe today. I studied the Westminster shorter and larger catechism, and the  Confession quite a bit at this time. What made me leave the Orthodox Presbyterian Church was the fact that they were not willing to help anyone. They had no charity or outreach into the community. The OPC church in my area moved to another city due to lack of membership. I ended up going to the Presbyterian Church of the U.S.A..

My Presbyterian Church of the U.S.A. days

Going to the Presbyterian Church of the U.S.A. was a different experience  than what I was used to in church. The Calvary Presbyterian Church in Riverside California, actually opened up their building to feed the homeless and poor in their neighborhood. They had boy scouts, A.A. meetings, gave away clothing, and let homeless into the church service. I was not used to seeing this in churches in California. Calvary Presbyterian opened my eyes to the true purpose of church. It was at this time I was delving deeper into the Westminster Confession of Faith and the shorter and larger Catechism. It wasn’t till my pastor Dean Kokjer gave me a “Book of Confessions” that I started looking further into other confessions.

The Orthodox Presbyterian Church split from the PCUSA in 1936 because of liberal theology and modernism. So needless to say, the OPC were not fans of the PCUSA. Me going to the PCUSA was anathema to the OPC church members; but, even though the PCUSA denomination has some serious issues, I still received more from them than the OPC. The problem with the OPC is that they never really supported the Westminster Standards. They always had some twisted catechism that was supposed to be easy for children to understand. They never really stuck to the Westminster Confession. Because I moved so much, I ended up at Westminster Presbyterian Church in Pasadena. They were nice; but, I moved to Virginia shortly after. I went to Providence Presbyterian (PCUSA) until 2015 until I left the PCUSA completely.

Where I am at today

The proliferation of false destructive heresies throughout the entire church has made it impossible to find a church. I truly believe that, If I had the Westminster Confession of Faith, the shorter and larger catechism, the Apostles Creed, and all the other creeds in my life earlier, I would not have gone through the Church roller coaster that I went through in my life. It is crucial that people have Christian doctrine early in life. Otherwise, it’s like getting bad grades or dropping out of High school. When it comes time to go to college, you have to make up all the classes in order to transfer to the University you want to go to. There are so many Christians out there, to limit yourself to one narrow minded theological point of view is to cripple your Christian growth tremendously.

That is why I am writing the Apostles-Creed.Org. Read the Church Fathers and what they said. Did they teach “Dispensationalism?” What about the Reformers, do you know what they taught or even if they existed? Modern theology has disconnected Christians from the very people who got us where we are now. If I could give anyone any advise, it would be to read all the confessions and listen to all Christian points of view. Don’t get stuck in your theological tradition. The answers to life’s problems are all found in the writings of the church. Read them.