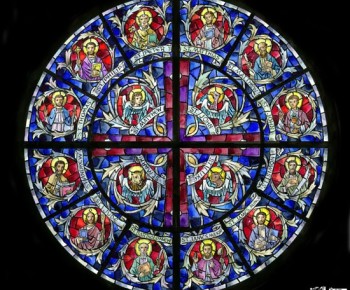 What does Catholic mean?

The word catholic is an accurate name for the Christian church. It simply means “universal.” The Christian church is universal in that there is not one nation that the church belongs to; but, all the nations of the world. The Westminster Confession of Faith states this well.

The visible church, which is also catholic or universal under the gospel (not confined to one nation, as before under the law), consists of all those throughout the world that profess the true religion; and of their children: and is the kingdom of the Lord Jesus Christ, the house and family of God, out of which there is no ordinary possibility of salvation.
Westminster Confession of Faith Chapter 25 Of the Church Section 2.

The word “catholic” comes from the Greek word “katholikos.”

The word “katholikos” comes from Greek “kata” + “holos,” which, when put together means “throughout all.” This is found in Acts where the phrase “church throughout all” is found. (Act 9:31 NAS)

The early church fathers called the Christian church catholic. The Apostles called it “the general assembly” (Heb 12:23 NAS) from the Greek word katholou which means in general.

So Christianity is the universal religion that came from “Messianic Judaism.” This means that God brought His salvation to all the world and not only to the nation of Israel. The worship at Jerusalem and the sacrifices in the temple ended for the nation of Israel in 70 A.D.. Now God’s worship and ordinances are carried out by the Church, from both Jews and Gentiles from all nations. The prophecies and promises to the Jews were fulfilled in Jesus Christ’s first coming.

The Definition of the word “Church“

The Greek word “ekklesia” literally is an “assembly”; however, God’s people are not just any assembly so the word “Church” is used in the place of “assembly.” The Church are those who are “called out” of the world. The origin is from the Greek words 1537 ek and 2564 kaleo.

The Church literally means “called out ones.” The Greek word “klesis” which means calling also refers to the word church.

The “Invisible” Church: The called and chosen people

The “Invisible” church are those chosen of God who are truly His people and not impostor’s pawing themselves off as God’s people. ” The Westminster confession of Faith states this well.

The catholic or universal church, which is invisible, consists of the whole number of the elect, that have been, are, or shall be gathered into one, under Christ the Head thereof; and is the spouse, the body, the fullness of him that filleth all in all.
Westminster Confession of Faith Chapter 25 Of the Church Section 1.

They are called “Invisible” because they are mixed in with the “Visible” church. The “Visible” church are all those who attend church and claim to be Christians. For more information on what it means to be called, please see “What does the Bible mean by called or Chosen?”

The Apostles used the words church, called, and chosen interchangeably. These are the “Invisible” church.

Paul, called as an apostle of Jesus Christ by the will of God, and Sosthenes our brother, to the church of God which is at Corinth, to those who have been sanctified in Christ Jesus, saints by calling, with all who in every place call upon the name of our Lord Jesus Christ, their Lord and ours:
(1Co 1:1-2 NAS)
For consider your calling, brethren, that there were not many wise according to the flesh, not many mighty, not many noble; but God has chosen the foolish things of the world to shame the wise, and God has chosen the weak things of the world to shame the things which are strong,
(1Co 1:26-27 NAS)
“These will wage war against the Lamb, and the Lamb will overcome them, because He is Lord of lords and King of kings, and those who are with Him are the called and chosen and faithful.”
(Rev 17:14 NAS)

Being called is being chosen and also refers to those who are predestined.

Blessed be the God and Father of our Lord Jesus Christ, who has blessed us with every spiritual blessing in the heavenly places in Christ, just as He chose us in Him before the foundation of the world, that we should be holy and blameless before Him. In love He predestined us to adoption as sons through Jesus Christ to Himself, according to the kind intention of His will,
(Eph 1:3-5 NAS)
And we know that God causes all things to work together for good to those who love God, to those who are called according to His purpose. For whom He foreknew, He also predestined to become conformed to the image of His Son, that He might be the first-born among many brethren; and whom He predestined, these He also called; and whom He called, these He also justified; and whom He justified, these He also glorified.
(Rom 8:28-30 NAS)

God chose His people and called them by the kind intention of His will. These people are called the Church.

The chosen are a part of the “assembly in heaven“

Those whom are truly His Church or “Called Out Ones” from a heavenly calling, enrolled in the general assembly in heaven.

Therefore, holy brethren, partakers of a heavenly calling, consider Jesus, the Apostle and High Priest of our confession. (Heb 3:1 NAS)

But you have come to Mount Zion and to the city of the living God, the heavenly Jerusalem, and to myriads of angels, to the general assembly and church of the first-born who are enrolled in heaven, and to God, the Judge of all, and to the spirits of righteous men made perfect, (Heb 12:22-23 NAS)

The “Visible” Church: The Assembly of all who claim to be Christian

The “Visible” Church is established by Christ to preach the gospel to everybody on earth and minister to everybody, Christian or not, in this life. The Westminster Confession of Faith states,

Unto this catholic visible church Christ hath given the ministry, oracles, and ordinances of God, for the gathering and perfecting of the saints, in this life, to the end of the world: and doth, by his own presence and Spirit, according to his promise, make them effectual thereunto.
Westminster Confession of Faith Chapter 25 Of the Church Section 3

Those who are called and chosen must assemble for the purpose of bringing love and good deeds to the world.

Let us hold fast the confession of our hope without wavering, for He who promised is faithful; and let us consider how to stimulate one another to love and good deeds, not forsaking our own assembling together, as is the habit of some, but encouraging one another; and all the more, as you see the day drawing near.
(Heb 10:23-25 NAS)

Because there is no “HolySpiritOmeter” that we can use to determine the genuineness of a persons heart, the church is mixed with those who are not truly chosen by God. They only give an impression or “false front” that they are God’s people.

There is no “Pure” Church Assembly on earth

Clearly we see that the Church is not a building that was erected by man. And so therefore, just attending the assembly of the church does not make you a Christian. The gospel of Matthew even talks about those who claimed to prophesy and perform miracles in Christs name as not known by God.

Not everyone who says to Me, ‘Lord, Lord,’ will enter the kingdom of heaven; but he who does the will of My Father who is in heaven. “Many will say to Me on that day, ‘Lord, Lord, did we not prophesy in Your name, and in Your name cast out demons, and in Your name perform many miracles?’ “And then I will declare to them, ‘I never knew you; depart from Me, you who practice lawlessness.’
(Mat 7:21-23 NAS)

It was common place for those who were in the Church assembly to be divided and causing all kinds of mischief.

I am amazed that you are so quickly deserting Him who called you by the grace of Christ, for a different gospel which is really not another; only there are some who are disturbing you, and want to distort the gospel of Christ But even though we, or an angel from heaven, should preach to you a gospel contrary to that which we have preached to you, let him be accursed
(Gal 1:6-8 NAS)
For certain persons have crept in unnoticed, those who were long beforehand marked out for this condemnation, ungodly persons who turn the grace of our God into licentiousness and deny our only Master and Lord, Jesus Christ.
(Jud 1:4 NAS)

The Church assembly on earth (Visible Church) can be become corrupted to be no church of God at all. Yet, God always has His true church (Invisible Church). There is never a day that there is no true chosen church of God on earth. The Westminster Confession states that, yet again, excellently.

This catholic church hath been sometimes more, sometimes less visible. And particular churches, which are members thereof, are more or less pure, according as the doctrine of the gospel is taught and embraced, ordinances administered, and public worship performed more or less purely in them.

The purest churches under heaven are subject both to mixture and error; and some have so degenerated, as to become no churches of Christ, but synagogues of Satan. Nevertheless, there shall be always a church on earth, to worship God according to his will.
Westminster Confession of Faith Chapter 25 Of the Church Section 4 and 5

The fact that the “Visible” church is not made up of 100% pure chosen saints is found in the Parable of the sower.

He presented another parable to them, saying, “The kingdom of heaven may be compared to a man who sowed good seed in his field. “But while men were sleeping, his enemy came and sowed tares also among the wheat, and went away. “But when the wheat sprang up and bore grain, then the tares became evident also. “And the slaves of the landowner came and said to him, ‘Sir, did you not sow good seed in your field? How then does it have tares?’ “And he said to them, ‘An enemy has done this!’ And the slaves said to him, ‘Do you want us, then, to go and gather them up?’ “But he said, ‘No; lest while you are gathering up the tares, you may root up the wheat with them. ‘Allow both to grow together until the harvest; and in the time of the harvest I will say to the reapers, “First gather up the tares and bind them in bundles to burn them up; but gather the wheat into my barn.”‘”
(Mat 13:24-30 NAS)

This is why many Christian churches seem completely corrupt while yet a few hold faithful to God’s Word. For more information on the different churches and the purity of the churches in the Bible, check out my article on “The 12 types of the visible church“