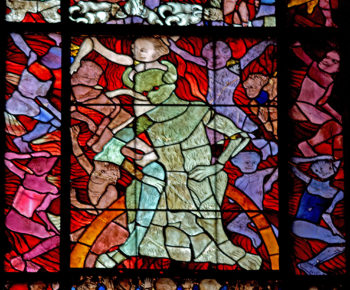 In the article “He descended into hell” I made the statement “Hades, hell, Sheol (is) described with the same attributes” which received the following criticism from someone who visited Apostles-Creed.Org. He sent me an email stating,

I noticed that you have an error on your web site. You have conflated Hades/Sheol with Hell. If you assume Hades/Sheol is the same thing as Hell, then you cannot make sense out of the Rev 20:14.

Since “the lake of fire” is Hell, one could interpret the verse as “Then death and Hell were thrown into Hell. Hell is the second death.” Clearly, throwing Hell into Hell is nonsense.

Just so you know…
John

This argument is a common one that many Christians and Non-Christian cultists use to make a distinction between “Hades” and the “Lake of Fire.” See the following similar examples.

“Death. (Revelation 20:14) This is not a literal entity but represents a state of inactivity, the absence of life.”
Jehovah Witness – What Is the Lake of Fire? Is It the Same as Hell or Gehenna?

“Death and Hades, as personified representatives of the enemies of Christ’ and His Church, are said to be cast into the lake of fire”
Jamieson-Fausset-Brown Bible Commentary – Commentary Revelation 20:14

While these views may be popular and well accepted, they do not hold true to the historical linguistic meaning the original writer intended. Of course Revelation is the most controversial book in the Bible so you can find a different interpretation with each person you talk to.

NOTE! As a general rule of thumb, it is not a good idea to interperet the rest of the Bible by one verse in the Book of Revelation.

The first century Greek understanding of Death and Hades

What the Greeks understood about death and hades differs widely from what modern Christians teach about death and Hades. The Bible concordance defines “Hades” as the following.

86 hádēs (from 1 /A “not” and idein/eidō, “see”) – properly, the “unseen place,” referring to the (invisible) realm in which all the dead reside, i.e. the present dwelling place of all the departed (deceased); Hades.
BibleHub.com – 86. hadés

Some Apostles used “Hades” to mean where the unrighteous dead go.

“And you, Capernaum, will not be exalted to heaven, will you? You shall descend to Hades; for if the miracles had occurred in Sodom which occurred in you, it would have remained to this day. “Nevertheless I say to you that it shall be more tolerable for the land of Sodom in the day of judgment, than for you.”
(Mat 11:23-24 NAS)

“Now it came about that the poor man died and he was carried away by the angels to Abraham’s bosom; and the rich man also died and was buried. “And in Hades he lifted up his eyes, being in torment, and saw Abraham far away, and Lazarus in his bosom. “And he cried out and said, ‘Father Abraham, have mercy on me, and send Lazarus, that he may dip the tip of his finger in water and cool off my tongue; for I am in agony in this flame.’
(Luk 16:22-24 NAS)

Some Apostles used “Hades” as an equivalent to “Sheol” from the old Testament. In the following verse, hades just means the grave or being dead.

“Because Thou wilt not abandon my soul to Hades, Nor allow Thy Holy One to undergo decay. ‘Thou hast made known to me the ways of life; Thou wilt make me full of gladness with Thy presence.’ “Brethren, I may confidently say to you regarding the patriarch David that he both died and was buried, and his tomb is with us to this day. “And so, because he was a prophet, and knew that God had sworn to him with an oath to seat one of his descendants upon his throne, he looked ahead and spoke of the resurrection of the Christ, that He was neither abandoned to Hades, nor did His flesh suffer decay. “This Jesus God raised up again, to which we are all witnesses.”
(Act 2:27-32 NAS)

The Apostles used “Hades” this way because when translating words from one language to another, a similar word has to be used to convey the meaning. The closest Hebrew word “Sheol” to the Greek is “Hades” which simply means, where dead people go. This definition is commonly used in the Bible; however, there is another definition of “Hades” that does not mean a place where the dead go. Hades was also a “god” in Greek mythology.

To understand what the average Greek meant to the people of Greece during the Apostles time, we need to understand Greek culture at the time the words were writen. It is common for Bible interpreters to force our modern ideas into the text. First century Greeks believed Hades was a god.

Hades was the brother of Zeus and Poseidon. After the overthrow of their father, Cronus, he drew lots with them to share the universe. He drew poorly, which resulted in becoming lord of the underworld and ruler of the dead.
Greek Mythology.Com – Hades

Hades ruled the underworld where he locked up the dead behind gates with keys.

The Keys of Hades

In Greek mythology Hades had keys which he locked the souls behind gates.

“The gates of Haides were securely locked to prevent the escape of souls. Haides, or his doorman Aiakos, kept the golden keys.”
Theoi.com – HAIDES ESTATE

The gates are mentioned in Matthew

“And I also say to you that you are Peter, and upon this rock I will build My church; and the gates of Hades shall not overpower it.”
(Mat 16:18 NAS)

The keys of Hades are also mentioned in revelation

The everyday Greek during the time of the apostles would have understood these passages to be referring to the Greek pagan religion.

The definition of Death

Death had a different meaning in the first century Greek mind than it does to us today. The Bible concordance states,

2288 thánatos (derived from 2348 /thnḗskō, “to die”) – physical or spiritual death; (figuratively) separation from the life (salvation) of God forever by dying without first experiencing death to self to receive His gift of salvation.
BibleHub.Com – Strong’s 2288. thanatos

Clearly “death” or “thanatos” in the Bible does teach physical death.

For the wages of sin is death, but the free gift of God is eternal life in Christ Jesus our Lord.
(Rom 6:23 NAS)

“Death” or “thanatos” did not always mean physical death to the first century Greek. “Thanatos” was also,

“… the daemonic representation of death in Ancient Greek mythology (daemonic here is used with its classical meaning, which refers to benevolent or benign nature spirits). He did not play a major part in Greek mythology and rarely appeared in any stories, as he was mostly displaced by Hades, the god of the Underworld.”
GreekMythology.Com – Thanatos

The first century Greek would also understand that “Death” or “Thanatos” was a spirit being along with Hades the god of the underworld. With this information, we can translate the meaning of “Death and Hades” in the Book of Revelation.

Death and Hades in Revelation

And when I saw Him, I fell at His feet as a dead man. And He laid His right hand upon me, saying, “Do not be afraid; I am the first and the last, and the living One; and I was dead, and behold, I am alive forevermore, and I have the keys of death and of Hades.
(Rev 1:17-18 NAS)

John is saying that Jesus Christ had fired Hades as god of the underworld, took Hades keys, and now Jesus Christ Himself is the keeper of souls.

John tells us that Death (Thanatos) and Hades are traveling together having authority given to them to kill a “fourth of the earth.”

And I looked, and behold, an ashen horse; and he who sat on it had the name Death; and Hades was following with him. And authority was given to them over a fourth of the earth, to kill with sword and with famine and with pestilence and by the wild beasts of the earth.
(Rev 6:8 NAS)

Clearly Death and Hades in this passage refer to Spirits or Angels. John said “he who sat on it had the name Death” meaning Death was a person and not a thing or place.

If Death or Hades were a place then Rev 6:8 would make no sense. A place is stationary and does not move. Nor does a place have authority only a person does.

In Greek Mythology, the Greek god Hades had a chariot which had black horses.

So if Death were riding an ashen horse it stands to reason from Greek Mythology that Hades was following Death in his chariot with black horses. This wording is referencing Greek Mythology. So in Rev 6:8 we see that when Death and Hades are mentioned together, John is referring to the spirit Thanatos and god Hades.

So now for the controversial verse that the whole issue is built on, Revelation 20:13-15.

First, the statement “death and Hades gave up the dead which were in them” would not make sense as places. The word “them” is,

Personal pronouns are not used for places but a person or thing. The word "there" would be used. An example is in Acts,

“… the sky opened up, and a certain object like a great sheet coming down, lowered by four corners to the ground, and there were in it all kinds of four-footed animals”
(Act 10:11-12 NAS)

In Revelation 20:14, the word "there" would have been used and not "them" if Death and Hades were places.

Second, This passage makes sense if we understand who the lake of fire was made for. Matthew said,

“Then He will also say to those on His left, ‘Depart from Me, accursed ones, into the eternal fire which has been prepared for the devil and his angels;
(Mat 25:41 NAS)

When John pairs Death and Hades together, he is referring to angels. For this reason, it is wrong to build a doctrine based off of the word “Hades” in Revelation and force that interpretation into the usage of “Hades” in Matthew, Luke, and Acts. It is a very big mistake in Bible interpretation that ignores the historical and linguistic usage of the word during the first century. Interpreting Death and Hades in Revelation 20:14 as a place or a thing ignores sound grammatical usage within the context of Revelation. John clearly shows Death and Hades as people (spirits or angels) who have duty’s, have authority to kill, are called a “he” by a name, are in motion, and that are judged by Christ along with the Devil and his followers. When Christ took the keys, He took them from the god of the underworld and not some location somewhere.