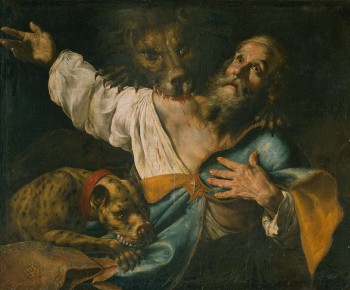 Saint Ignatius of Antioch was a great Christian and early church father that wrote several letters that are referenced by Christians today. He was killed by the Roman government because he did not worship the Roman Emperor or the Roman gods. Saint Ignatius’s birth day is unknown. He was born somewhere around 40 A.D.. Antioch is located in, what is today called Antakya, Turkey. He was killed during the Reign of Roman Emperor Trajan between 98 to 117 A.D.

Ignatius lived during a time when Roman civilization was deranged and crazy about killing innocent people. He lived during the time of the Emperor Domitian and Trajan, both of which persecuted and killed Christians bitterly. It is written in the “Martyrdom of Saint Ignatius” that,

When Trajan, not long since, succeeded to the empire of the Romans, Ignatius, the disciple of John the apostle, a man in all respects of an apostolic character, governed the Church of the Antiochians with great care, having with difficulty escaped the former storms of the many persecutions under Domitian, inasmuch as, like a good pilot, by the helm of prayer and fasting, by the earnestness of his teaching, and by his [constant] spiritual labour, he resisted the flood that rolled against him.
The Martyrdom of Ignatius Chapter I. Desire of Ignatius for martyrdom.

A loving and peaceful man – Ignatius

Ignatius was a peaceful preacher of God’s Word. He was a loving and encouraging christian. He said to the church,

Therefore in your concord and harmonious love, Jesus Christ is sung. And do ye, man by man, become a choir, that being harmonious in love, and taking up the song of God in unison, ye may with one voice sing to the Father through Jesus Christ, so that He may both hear you, and perceive by your works that ye are indeed the members of His Son.
The Epistles of Saint Ignatius Chapter IV. The same continued

It is a wonder how a society could maintain its insanity of putting to death innocent peaceful people in the name of false gods and mad Emperors.

Ignatius the Bishop of Antioch

Eusebius of Caesarea wrote about Ignatius. Ignatius was the second bishop in Antioch. Eusebius says,

Ignatius lived during the same time as Polycarp, another great christian in church history.

At that time Polycarp, a disciple of the apostles, was a man of eminence in Asia, having been entrusted with the episcopate of the church of Smyrna by those who had seen and heard the Lord.
Ecclesiastical History of the Church Book III CHAPTER XXXVI.

Murdered by the Roman government

Eusebius of Caesarea also wrote how Ignatius was killed by being thrown before wild beasts in Rome.

Report says that he was sent from Syria to Rome, and became food for wild beasts on account of his testimony to Christ.
Ecclesiastical History of the Church Book III CHAPTER XXXVI.

The Roman emperors of that time were convinced they were god and that there were many gods. They would execute anyone who would not bow down and worship them or their gods.

For Trajan, in the ninth year of his reign, being lifted up [with pride], after the victory he had gained over the Scythians and Dacians, and many other nations, and thinking that the religious body of the Christians were yet wanting to complete the subjugation of all things to himself, and [thereupon] threatening them with persecution unless they should agree to worship dæmons, as did all other nations, thus compelled all who were living godly lives either to sacrifice [to idols] or die.
The Martyrdom of Ingnatius Chapter II Ignatius is condemned by Trajan

Ignatius is an excellent testimony to the sane and sober teaching of Christianity. His testimony displays the mental illness and derangement of the Roman government and society of his time.