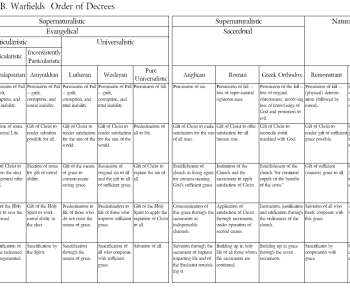 Christianity is very diverse in it’s theology. While Christianity has no easy categorization of beliefs, Christians will generally fall into one of two types: the Naturalist or the Supernaturalist. Most Christians are a mixture of Supernaturalist and Naturalist; however, most Christians lean towards naturalism. This has to do with the understanding of the “Order of Decrees.” Benjamin Breckenridge Warfield drafted a very clear chart that shows where Christians lie in the spectrum in the “Order of Decrees.”

The Naturalist Christian denys that God rules everything and governs creation through providence. They basically believe that God created everything and then let everything run by natural laws. This is the major point of Deism and hardcore free will proponents.

Naturalism: a theory denying that an event or object has a supernatural significance; specifically : the doctrine that scientific laws are adequate to account for all phenomena
Merriam-Websters Dictionary

The Supernaturalist believes God controls creation and that nothing is arbitrary or by chance.

Supernaturalism: belief in a supernatural power and order of existence
Merriam-Websters Dictionary

The core issue between the Supernaturalist and Naturalist Christian is how each views the “Order of Decrees” according to Gods creation and providence.

What are “The Order of Decrees”

The order of decrees are a Christian teaching of how God created and governs all His creation. How the particular Christian views this will influence whether their theology is “Supernatualist” or “Naturalist.” The Reformed view is put clearly in the Westminster Shorter Catechism.

Q. 7. What are the decrees of God?
A. The decrees of God are, his eternal purpose, according to the counsel of his will, whereby, for his own glory, he hath foreordained whatsoever comes to pass.
The Westminster Shorter Catechism Question 7

According to the Reformed Faith, God foreordained everything by creating it and governing it according to His “Providence.”

Q. 8. How doth God execute his decrees?
A. God executeth his decrees in the works of creation and providence.
The Westminster Shorter Catechism Question 7

While it is true that Christians believe God created everything and maintains His creation, there are many differing viewpoints on how God did/does this.

What is the difference between the teachings of creation and Providence in Christianity?

The Naturalist believes God created everything and set it in motion to sustain itself. Everything works according to random events that God does not control. The spectrum of differing beliefs varies from the “Particular Supernaturalist” all the way to the “Pelagian Naturalist.”

B.B. Warfields Chart for “the Order of Decrees” in Christiandom

B.B. Warfield graphically represented the entire Christian spectrum of beliefs in his book “The Plan of Salvation.” The graph is a general representation of the church as a whole and of coarse cannot possibly exhaustively represent the beliefs of all denominations that exist. The far left is the “Calvanistic” view of Salvation. As you move to the right the theological point of view becomes more naturalistic. The most “naturalistic” theology in Christianity is the “Pelagian” view.

For example, on the left side, the “Infralapsarian” position is the “Particular Supernaturalist” view called T.U.L.I.P.:

The opposite far right view, the “Pelagian” position, is the “Naturalist” view that denies all points in T.U.L.I.P.: 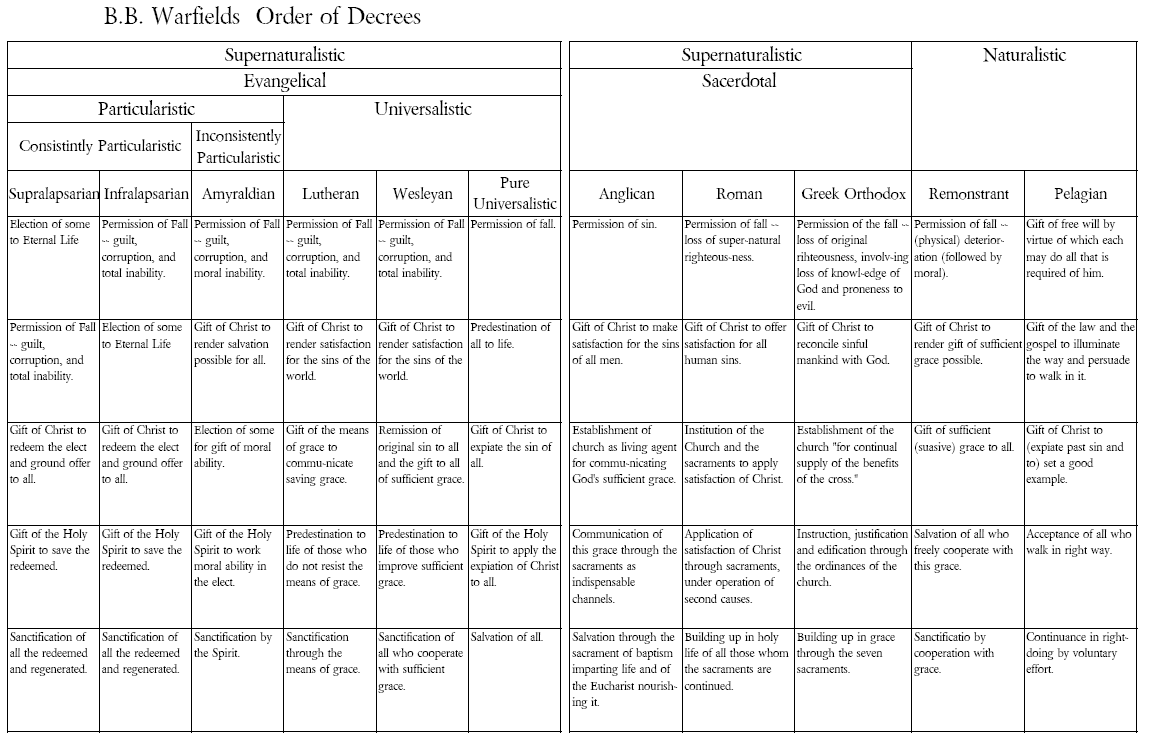 BB Warfield Order of Decrees – The Naturalist and Supernaturalist

Brief Explanation of the chart

Christianity has a wide spectrum between Supernaturalism and Naturalism. Below is a brief explanation of each general group within the spectrum.