Reformation Wall (Mur des Réformateurs) is the international monument to the Reformation the great leaders of the Christian Reformation. The monument is located in Geneva Switzerland. The monument also includes important events and documents that changed the world as we know it today. The monument was built in 1909 for John Calvin’s 400th birthday. 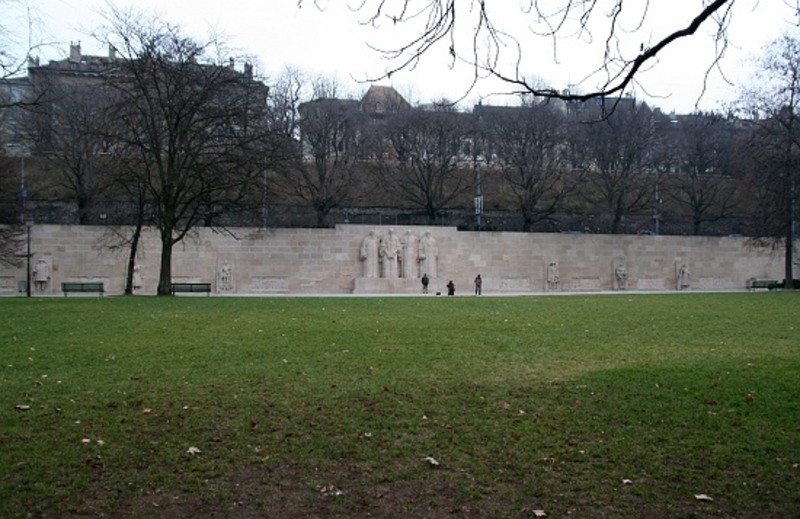 Built into the old city walls of Geneva, the Reformation Wall overlooks the Parc des Bastions. Just a stone’s throw from the magnificent Place de Neuve in an exceptionally beautiful setting, the major figures of the Protestant Reformation are depicted as giant statues and bas-reliefs.

Behind the statues runs the motto shared by the Reformation and Geneva: Post Tenebras Lux (“After Darkness, Light”)
HuguenotFellowship.org – The Reformers on the Statue

In the middle of the wall are the following main reformation leaders.

The main statues in the middle of the wall 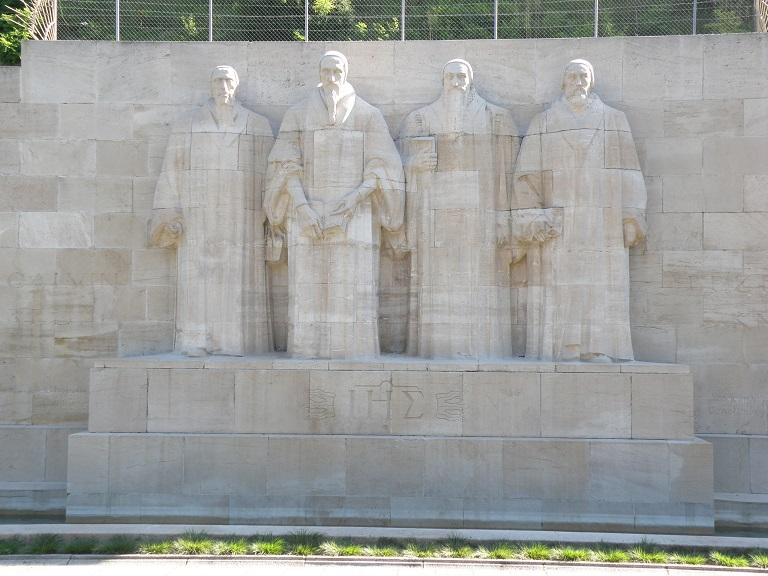 The main statues in the center of the Reformation Monuments are William Farel, John Calvin, Theodore Beza, and John Knox. 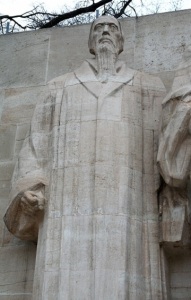 Founder of the Reformed Church in Neuchâtel, Berne, Geneva, and Vaud in Switzerland. He worked together with John Calvin to train missionaries across Europe. 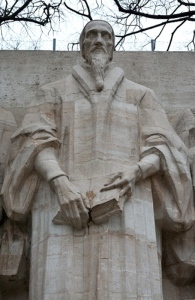 He mainly influenced Presbyterian Church doctrine and Reformed theology. He began “Systematic Theology” with his book Institutes of the Christian Religion. John Calvin wrote one of the largest set of Bible commentaries during his time. He trained and sent missionaries across Europe. 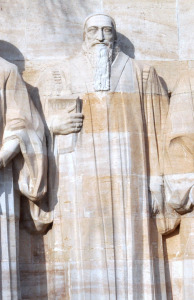 He was a disciple of John Calvin and later became John Calvin’s successor in Geneva. He further spread Reformed theology in France.

He studied under John Calvin after being declared an outlaw in England by Queen “Bloody” Mary. He later founded the Presbyterian church in Scotland.

Statues to the left of the main monument

To the left of the middle statues are three smaller statues of William the Silent, Gaspard de Coligny, and Frederick William of Brandenburg.

He was a French nobleman and admiral who lead the French Huguenot during the French Wars of Religion. He provided support and refuge for reformed protestants and helped those under religious persecution to escape. 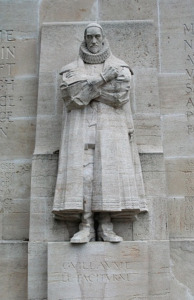 Also known as William the 1st of Orange was the major proponent of the Dutch war against the Spanish which led to the Eighty Years War between 1568–1648. The northern Low Countries declarated independence from the Spanish king on July 26th, 1581. 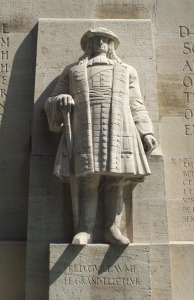 “Creator of the Brandenburg Tolerance Edict giving equal rights to Lutherans and Calvinists and the Potsdam Edict giving safety of passage to Brandenburg-Prussia to Huguenots after the Revocation of the Edict of Nantes (1620-1688).” (BiblicalGeographic.com – Reformation Wall, Geneva, SWITZERLAND)

Statues to the right of the main monument 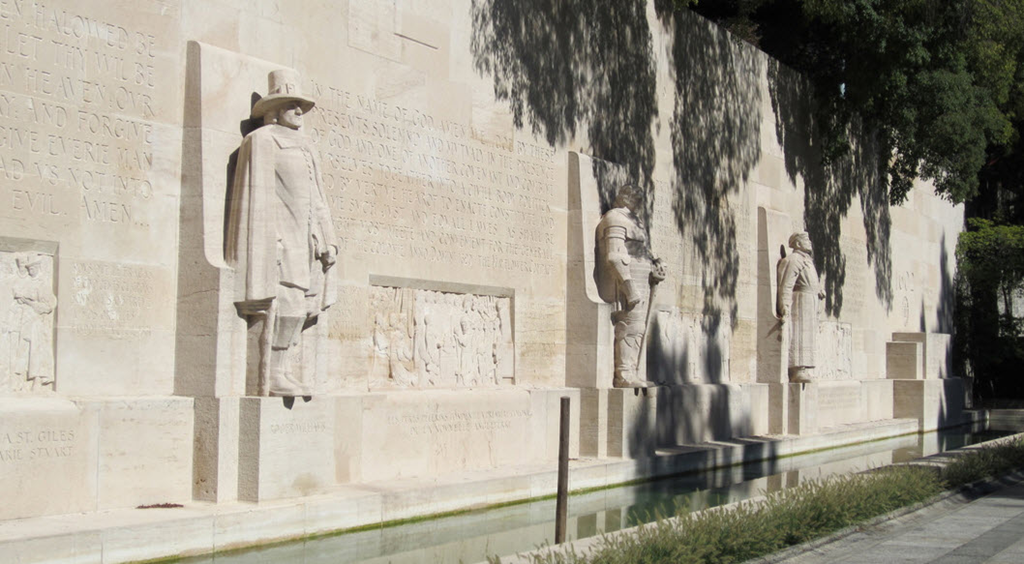 To the right of the middle statues are three smaller statues of Roger Williams, Oliver Cromwell, and Stephen Bocskay.

He was an English Particular Baptist theologian that helped establish religious freedom and the separation of church and state. He founded the Providence Plantation colony in 1636 which was a baptist and other religious minority safe haven. 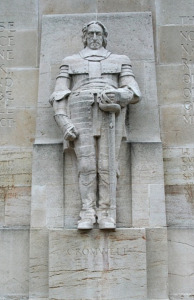 He was a “independent” puritan that became a dictator called the “Protectorate” in the British Isles between 1553 to 1558. He was a major proponent in the English Civil war and was a part of the establishment a commonwealth in England instead of a Royalty. 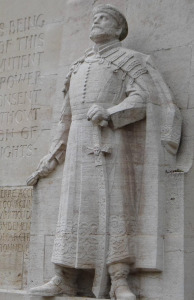 He was a Hungarian Noble who was a Calvinist protestant. He went to war against the Habsburg Holy Roman Emperor’s who tried to force Roman Catholicism on Hungary. He promoted the religious freedom for Hungary and Transylvania in the Treaty of Vienna in 1606.

Carved Reliefs in the Wall

The following quotes are from BiblicalGeographic.com. “Along the wall are also reliefs depicting:” 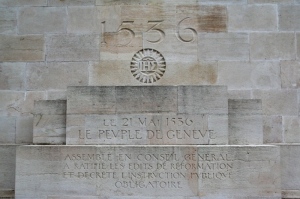 “An inscription commemorating Geneva’s official acceptance of the Reformation, 21 May 1536.” 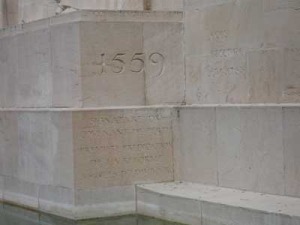 An inscription 1559 the year John Knox returned to Scotland 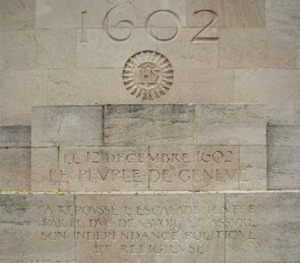 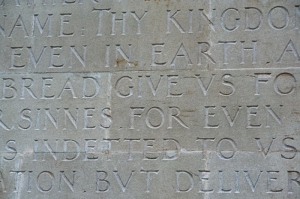 “Preaching of the Reformation to the people of Geneva in the presence of envoys from Bern. To the left is an inscription of the Lord’s Prayer in French.” 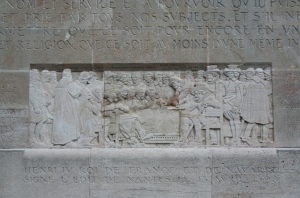 “King Henry IV (of Navarre) signing the Edict of Nantes (1598), which ended the Wars of Religion in France.” 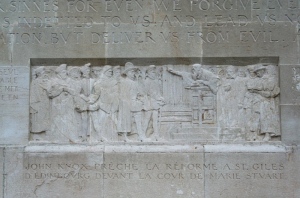 “John Knox preaching against Queen Mary Stuart from his pulpit in St Giles Cathedral, Edinburgh. Above is an inscription of the Lord’s Prayer in English.” 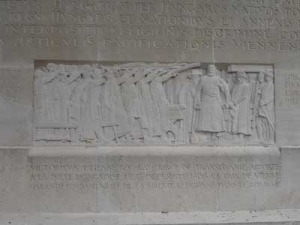 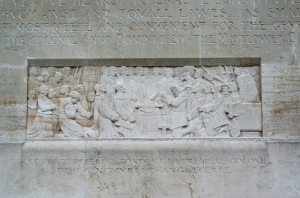 “Roger Williams and the Pilgrim Fathers praying on the Mayflower as it sails to America. Above is an inscription of the Mayflower Compact (1620).” 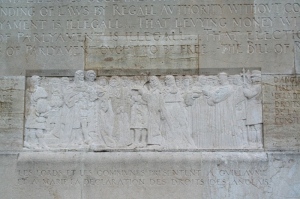 “The British Parliament presenting the Bill of Rights, an act declaring the rights and liberties of the subjects, also the settling the succession of the crown, to William and Mary, Prince and Princess of Orange in 1689.”

HuguenotFellowship.org – History The Reformers on the Statue