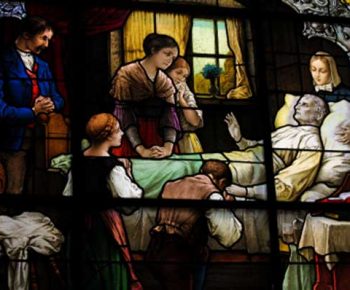 We know God is our Health and salvation. As the Hymn states,

The Bible teaches that God restores us to health when we are sick.

“The LORD will sustain him upon his sickbed; In his illness, Thou dost restore him to health.” (Psa 41:3 NAS)

Death will occur for everyone, regardless of the fact that God is our health and salvation. In the Book of Genesis, God said,

“By the sweat of your face You shall eat bread, Till you return to the ground, Because from it you were taken; For you are dust, And to dust you shall return.” (Gen 3:19 NAS)

A memento mori Remember that you must die. Because of this fact, we should be aware of ourselves and how we live our lives.

We should always be mindful of our death

Everybody should be aware and thoughtful of the day in which they will die. The Bible teaches us to think about our own death.

“And inasmuch as it is appointed for men to die once and after this comes judgment” (Heb 9:27 NAS)

“Be not slow to visit the sick: for by these things thou shalt be confirmed in love. In all thy works remember thy last end, and thou shalt never sin.” (Sirach 7:39-40)

Visiting the sick is directly correlated to remembering our own death. Being mindful of your own death should bring compassion upon those who are sick and dying.

Some day we may be in the same situation. We should help the sick in the same way we would want to be helped. The Bible teaches us how to treat those who are sick and dying.

What does the Bible say about terminal illness

In the Old Testament, people with contagious terminal illnesses were quarantined “outside the camp.” The Priest was to be notified about someone who has a terminal illness.

The Priest was required to inspect the people for disease. Those who had a contagious terminal illness were to live outside the camp in quarantine.

“He shall remain unclean all the days during which he has the infection; he is unclean. He shall live alone; his dwelling shall be outside the camp.” (Lev 13:46 NAS)

“Then the LORD spoke to Moses, saying, “Command the sons of Israel that they send away from the camp every leper and everyone having a discharge and everyone who is unclean because of a dead person. “You shall send away both male and female; you shall send them outside the camp so that they will not defile their camp where I dwell in their midst.” (Num 5:1-3 NAS)

The Priest was required to go to the “outside of the camp” to check on the progress of the disease.

Those who had a disease, that was not contagious, lived within the city in the care of family or friends. During Christ’s ministry, the people brought the sick, from within the city, to Christ to be healed.

“And Jesus was going about in all Galilee, teaching in their synagogues, and proclaiming the gospel of the kingdom, and healing every kind of disease and every kind of sickness among the people. And the news about Him went out into all Syria; and they brought to Him all who were ill, taken with various diseases and pains, demoniacs, epileptics, paralytics; and He healed them.” (Mat 4:23-24 NAS)

Jesus healed the sick as a part of His High Priestly duties.

“Therefore, He had to be made like His brethren in all things, that He might become a merciful and faithful high priest in things pertaining to God, to make propitiation for the sins of the people.” (Heb 2:17 NAS)

God wants us to seek Him first in our illness and not to rely on physicians alone.

“And in the thirty-ninth year of his reign Asa became diseased in his feet. His disease was severe, yet even in his disease he did not seek the LORD, but the physicians.” (2Ch 16:12 NAS)

This does not mean consulting physicians are against God’s Word. Our Saviour said,

God requires His people to be involved in those who are sick and dying.

The Church is commanded to care for the sick

In Matthew, Christ said those who neglect to minister to the sick and dying will be judged by Christ.

“Then He will also say to those on His left, ‘Depart from Me, accursed ones, into the eternal fire which has been prepared for the devil and his angels; for I was hungry, and you gave Me nothing to eat; I was thirsty, and you gave Me nothing to drink; I was a stranger, and you did not invite Me in; naked, and you did not clothe Me; sick, and in prison, and you did not visit Me.’ “Then they themselves also will answer, saying, ‘Lord, when did we see You hungry, or thirsty, or a stranger, or naked, or sick, or in prison, and did not take care of You?’ “Then He will answer them, saying, ‘Truly I say to you, to the extent that you did not do it to one of the least of these, you did not do it to Me.’ “And these will go away into eternal punishment, but the righteous into eternal life.” (Mat 25:41-46 NAS)

Individual families are also to help their own household as well. Families should help to the best they can their own family members and not abandon them to the government or others.

“But if anyone does not provide for his own, and especially for those of his household, he has denied the faith, and is worse than an unbeliever.” (1Ti 5:8 NAS)

“But whoever has the world’s goods, and beholds his brother in need and closes his heart against him, how does the love of God abide in him? Little children, let us not love with word or with tongue, but in deed and truth.” (1Jo 3:17-18 NAS)

The Apostle James exspressly teaches that the Christian Church is to tend to the needs of the sick.

Is anyone among you suffering? Let him pray. Is anyone cheerful? Let him sing praises. Is anyone among you sick? Let him call for the elders of the church, and let them pray over him, anointing him withoil in the name of the Lord; and the prayer offered in faith will restore the one who is sick, and the Lord will raise him up, and if he has committed sins, they will be forgiven him. Therefore, confess your sins to one another, and pray for one another, so that you may be healed. The effective prayer of a righteous man can accomplish much.” (Jam 5:13-16 NAS)

The Church and Ministering to the terminally ill

The local church should provide services for those who are terminally ill. The Christian Church, in general, includes visiting the sick in their confessions and catechisms as an integral part of their ministry.

The Book of Common Prayer of the Episcopal Church

The Book of Church Order of the Presbyterian Church

“The power of the prayer of faith is great, and Christians therefore should make entreaty for the sick at the throne of heavenly grace, and should also seek God’s blessing upon all proper means which are being employed for their recovery. Moreover, when persons are sick, their minister, or some officer of the church, should be notified, that the minister, officers and members may unite their prayers in behalf of the sick. It is the privilege and duty of the pastor to visit the sick and to minister to their physical, mental, and spiritual welfare. In view of the varying circumstances of the sick, the minister should use discretion in the performance of this duty.” (Book of Church Order PCA The Visitation of the Sick 60-1.)

“Let the time not used for public worship be spent in prayer, in devotional reading, and especially in the study of the Scriptures, meditation, catechizing, religious conversation, the singing of psalms, hymns, or spiritual songs; visiting the sick, relieving the poor, teaching the ignorant, holy resting, and in performing such like duties of piety, charity, and mercy.” (Book of Church Order PCA The Lords Day 48-7)

The Catechism of the Catholic Church

“At an appropriate moment during Communion, the Priest entrusts the Eucharist from the table of the altar to Deacons or acolytes or other extraordinary ministers, so that afterwards it may be brought to the sick who are to receive Holy Communion at home” (Roman Missal, The Chrism Mass)

1524 In addition to the Anointing of the Sick, the Church offers those who are about to leave this life the Eucharist as viaticum. Communion in the body and blood of Christ, received at this moment of “passing over” to the Father, has a particular significance and importance. It is the seed of eternal life and the power of resurrection, according to the words of the Lord: “He who eats my flesh and drinks my blood has eternal life, and I will raise him up at the last day.” The sacrament of Christ once dead and now risen, the Eucharist is here the sacrament of passing over from death to life, from this world to the Father.

“All Christians are under obligation to seek to make the will of Christ supreme in our own lives and in human society… in the spirit of Christ, Christians should oppose racism, every form of greed, selfishness, and vice, and all forms of sexual immorality, including adultery, homosexuality, and pornography. We should work to provide for the orphaned, the needy, the abused, the aged, the helpless, and the sick. We should speak on behalf of the unborn and contend for the sanctity of all human life from conception to natural death…” (Basic Beliefs, The Christian & the Social Order)

It is important to get with your specific denomination or a chaplain through a source such as Health Care Chaplaincy Network for the needs of those who are dying from a terminal illness that do not have a church of their own.

The Christian church has pioneered helping the sick. Since the foundation of Christianity, christians have invested their lives into helping the sick. The modern hospital is a Christian invention. You can get in home or in hospice services for worship, prayer, and Bible study for the terminally ill. Service availability will depend on the individuals denomination, location, and family participation. The Roman Catholic Church has the National Association of Catholic Chaplains advocates for the profession of spiritual care to terminally ill.

The Episcopal Church works with chaplains and bishops to facilitate this process. The Episcopal Church has Chaplains as well. You can get more information on Episcopal Chaplaincy at the episcopalchurch.org website. The Presbyterian and Reformed Commission on Chaplains visit hospitals, correctional facilities, hospice ministries, retirement communities, police and fire stations, and businesses. The Southern Baptist Convention has the North American Mission Board that provides support for thousands of chaplains across many mission fields in North America.

Information on how to minister to the sick and dying